“There is no climate justice without racial justice” 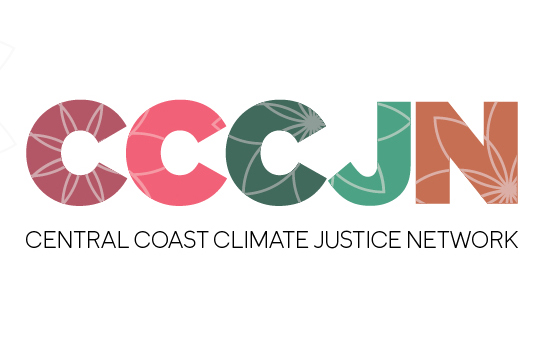 Letter of Support and Solidarity

There is no climate justice without racial justice.

We, the Central Coast Climate Justice Network (C3JN) affirm that the lives, dreams, guidance, wisdom, lived experiences and futures of Black people and peoples of African descent in the U.S. and the world matter. We write these words with great conviction and solidarity: Black Lives Matter. They matter to Black communities and they matter to all of us because there can be no freedom while any of us is oppressed. As Dr. Martin Luther King, Jr. wrote in his “Letter from a Birmingham Jail,” we are all “caught in an inescapable network of mutuality, tied in a single garment of destiny. Whatever affects one directly, affects all indirectly.” The harms and violence perpetrated against Black people reflect not only a global pandemic of white supremacy, but also the intersecting and deeply entrenched disdain for justice, equity, and respect for human rights more broadly. The federal government’s refusal to address climate change is a direct result of the fossil fuel industry’s deliberate and coordinated efforts, over many years, to ensure a plan of inaction. Anti-Blackness is also a key driving force behind the U.S. unwillingness to tackle climate change, as many white Americans experience racial anxieties because they associate pro-climate policy proposals with the first Black President of the U.S., Barack Obama, who took affirmative steps to address that crisis. In other words, anti-Black racism is killing Black people and it is killing the planet. Thus we all have an interest in uprooting and confronting racism and promoting racial justice because Black lives depend on it, and the lives of people everywhere do as well.

In our Charter, we (the C3JN) declare our commitment to challenging unjust power relations, healing historic harms, promoting self-determination and equity, and changing deeply-rooted systems, power dynamics, and relationships to advance climate justice. Our mission is to forge a regional partnership between social justice and environmental movements to expand our collective power, so we can advance restorative actions and systems change centering on communities who bear the greatest burden of climate change impacts. But we can only live up to these commitments and achieve this mission if we build common cause with Black communities in our region and beyond, working together as partners. We commit to do this work from this day forth.

Climate change is indiscriminate as to who it impacts most. Climate change is not racist. Rather, it is the society that we live in that marginalizes people economically, politically and socially. It is our social systems that site toxic fossil fuel plants and other infrastructure in lower income, predominantly Black, Indigenous, People of Color (BIPOC) communities. It is our white supremacist social systems that have physically pushed these communities to live in places with the greatest exposure to climate impacts — including drought, hurricanes, sea level rise and flooding. It is similarly our white supremacist society that overpolices these communities, compounding marginalization with racialized brutality, which has too many times ended in the murder of black and brown peoples.

As we continue to work on reducing community transmission of COVID-19, we have to acknowledge and confront the reality that Black people are becoming infected and dying at dramatically disproportionate rates. These health disparities are exacerbated by environmental racism. Studies have shown that living in polluted areas–such as near refineries, oil developments, and power plants–predisposes people to greater risk of illness and death associated with COVID-19. As protests against racism and police brutality are met with further racism and police brutality, people are similarly made more vulnerable to COVID-19. The use of pepper spray causes coughing, tearing, and the mucus membranes to run, increasing transmission risk. The impacts of state and vigilante violence are further aggravated by the already considerable stresses and anxieties of living while Black in a racist society, which produce high levels of health risk under “normal” circumstances.

While climate change, fossil fuels, and pepper spray are not racist in-and-of themselves, they are used as tools by a racist system that disproportionately targets and sacrifices people of color. History is never in the past, it is always a living force that we can acknowledge and deal with, or ignore at our peril. What is now known as the United States of America is a nation built on the genocide and enslavement of both Indigenous peoples and peoples of African descent. There is a common misperception that Indigenous peoples faced conquest, colonialism, and genocide and that people of African descent had to contend with enslavement. Ethnic Studies, Black Studies, and Indigenous Studies scholars have now thoroughly documented that both Black and Indigenous peoples faced and survived conquest, colonialism, genocide, and enslavement.  Enslaved labor, and its commodification which was sustained through the slave trade, was the energy required to transform natural resources that what is now known as North America was so abundant in, into the commodities (cotton, namely) that land-and-slave owners profited from. This bedrock of production that built the wealth of this society rests firmly on the belief that Black lives do not matter. The benefits that we reap from fossil fuels, our ability to drive hundreds of miles for a road trip to the Eastern Sierras, to the fine cotton products crafted by enslaved peoples, share the same fundamental disconnect: that we benefit from the sacrifices of Black, Indigenous, and people of color who are directly or indirectly impacted by energy production. From being relegated to astonishingly polluted and highly policed neighborhoods adjacent to oil and gas production, to working frontline jobs that render them more susceptible to other public health crises such as the current COVID-19 global pandemic, the production of energy in American society has deep roots in the triple threat of racial capitalism, chattel slavery, and settler colonialism–all of which are systems that thrive off of constructing and maintaining brutal hierarchies between people and between people and our more than human relations.

The murders of Breonna Taylor, Meagan Hockaday, George Floyd, Ahmaud Arbery, Tony McDade, David McAtee and so many other Black people have reminded us that some of this nation’s denizens are singled out for punishment and death for no reason other than the color of their skin. In recent weeks, many of us have been working to provide mutual aid to people in need of food and basic services in the absence of a functioning federal government and health care system; protesting in the streets for racial justice in a nation that perpetuates unrestrained violence against many of its citizens simply because of their racial-ethnic heritage; and sending support to communities around the U.S. and the world during this time of great need and deprivation. We will continue that work, taking our lead from Black community activists whose voices and knowledge must be centered in this struggle. As climate justice activists, it is imperative that we bring the same level of urgency to the struggle for racial justice that we bring to our efforts to address climate change. Much of the climate emergency discourse from environmentalists assumes that climate disruption is the first time that humans have been threatened with an existential crisis. Nothing could be further from the truth. As the experiences with genocide, colonialism, enslavement, and other forms of state and institutional violence that Black communities have endured amply indicates, we must acknowledge that our Black brothers and sisters have always had to fight for their existence.

C3JN stands in solidarity with Black people across the nation and the world, as allies and accomplices who desire to build societies that respect the values of justice, equity, inclusion, peace, sustainability and democracy. All of these values are at risk and being trampled on at this time, and we lift them up as we work side by side with Black leaders here and around the world. From this day forward, C3JN commits to deepening its investment in climate, environmental, economic, and social justice by:

*inviting Black-led organizations to join and participate in C3JN

*Pushing the Santa Barbara County and the County of Ventura governments to do all of the above, particularly as it concerns climate justice, environmental justice, and responses to the ongoing COVID-19 pandemic.

We aim to amplify the demands of Healing Justice Santa Barbara and the national demands of the Movement For Black Lives, some of which have already been acted upon, and some of which remain outstanding. They are:

*We demand protection and preservation of Black landmarks, rather than monuments to white supremacy.

*Prioritize the restoration of these spaces and name their Black creators.

*We demand divestment from police and investment in Black communities

*We demand an end to the war against Black people

*We demand community control over schools, colleges, and universities, and that must include cutting ties with police departments.

*We demand community control over laws, institutions, and policies that are meant to serve Black communities.

*We demand reparations for past and continuing harms against Black people

*We demand that the rights of protesters be respected

We close this letter of solidarity with a quote from Black feminist author and activist adrienne maree brown:

“We are in an imagination battle. Trayvon Martin and Mike Brown and Renisha McBride and so many others are dead because, in some white imagination, they were dangerous. And that imagination is so respected that those who kill, based on an imagined, radicalized fear of Black people, are rarely held accountable. I often feel I am trapped inside someone’ else’s imagination, and I must engage my own imagination in order to break free.”