Sociology of the (MEDIA) Spectacle

“Fear is the new beauty,” says Los Angeles artist Max Grundy. How can we understand this assertion and fathom its implications? We will take up these questions and more in a series of thought provoking films and essays exploring the theory, history, and function of mass media and the public sphere and the so-called Society of the Spectacle.

In the words of George Ritzer, “By way of the culture industry, consumer society and the media, capitalism conspires to control individuals and alienate them from social life by creating distracting and phantasmagoric spectacles and by commodifying all the spheres of social life. What becomes important in spectacular society is the desirable surface of images and signs… the attention grabbing spectacle.”

The society of the spectacle is devoted to “the ceaseless manufacture of pseudo-needs,” in the words of Guy Debord.

But, as the Situationists, led by Debord, pointed out, the rise of spectacular society simultaneously creates the conditions for revolt against the spectacle, namely boredom, apathy, alienation, and emptiness.

In The Society of the Spectacle, Debord stated simply that “The spectacle corresponds to the historical moment at which the commodity completes its colonization of social life…. The spectacle is a permanent opium war waged to make it impossible to distinguish goods from commodities, or true satisfaction from a survival that increases according to its own logic.”

From the standpoint of contemporary cultural and media theory, we begin with Grundy’s question and conduct an analysis of our contemporary historical moment, in which the so-called global war on terror converges with consolidation of corporate control over global media and the proliferation of micro-media production enabled by emergent digital technologies and the World Wide Web—ours is the age of the spectacle and the so-called permanent war on terror.

We then look back on the historical transitions from industrial society to consumer society to our contemporary digital, information and network society, tracking the political creation and subsequent structural transformation of the public sphere and the emergent new media technologies that have always constituted the range and power of publics.

We will end with an analysis of the media reform movement in the US.

Broadly conceived, our objective is to bring media theory into contemporary social, cultural and environmental theory.

The Art of Los Angeles Artist MAX GRUNDY: FEAR IS THE NEW BEAUTY 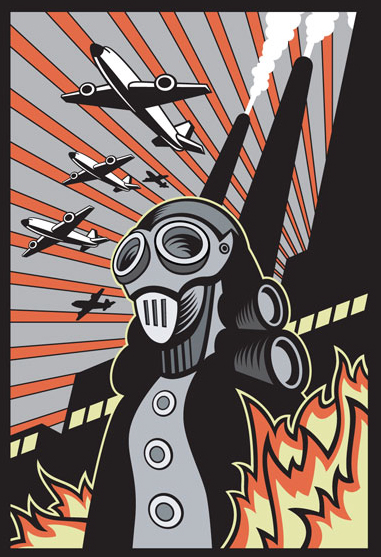